My love of swatching is well known. Once you know how a stitch may work in a yarn, what about the next step? I always want to know how practical is it for a particular application. There’s nothing more frustrating than spending hours on a project only to have it look or perform terrible after one day of use.

That’s when it’s time to jump in and see what happens.

In December, I pulled out Kate Atherley‘s Knit Mitts: The Ultimate Guide to Knitting Mittens & Gloves for the Whole Family. I looked through my yarn stash and chose a ball of single-ply superwash merino laceweight along with some 2mm needles.

I hear you gasping no, don’t use a single ply. There were a few reasons for choosing this ball of yarn over any others.

First, I wanted to use yarn that I had in my stash; I purchased this back in 2008!

Second, I wanted them to be in a colour I wanted to wear. This is a lovely silver-grey and while I prefer black, I like my eyesight too.

Third, curiosity. I have knitted a few items over the years in single-ply yarns with various degrees of success. I know they shouldn’t be used in high wear (friction) situations.

My experience is very different knitting with single-ply yarns than when I crochet with them. After designing the crocheted version of the Cashmere Triangle Scarf I was curious what knitting it in the round would be like.

However, I wanted to do a trial run before I attempted cashmere. A single-ply superwash merino sounded to be a smart compromise. In some ways it’s similar — yarn weight (lace), structure (single ply). In others it’s different superwash merino is very different from cashmere. However, I also had a feeling this would help me create a more wearable fabric.

So I cast on and I knitted them into my ideal fingerless mitt. A very short cuff, as I often wear long sleeves and a watch. The pinkie and ring fingers end over my knuckles as these fingers are often the coldest. The other three end at my knuckles or just before and allow me greater dexterity.

The result is a pair of mitts I adore. 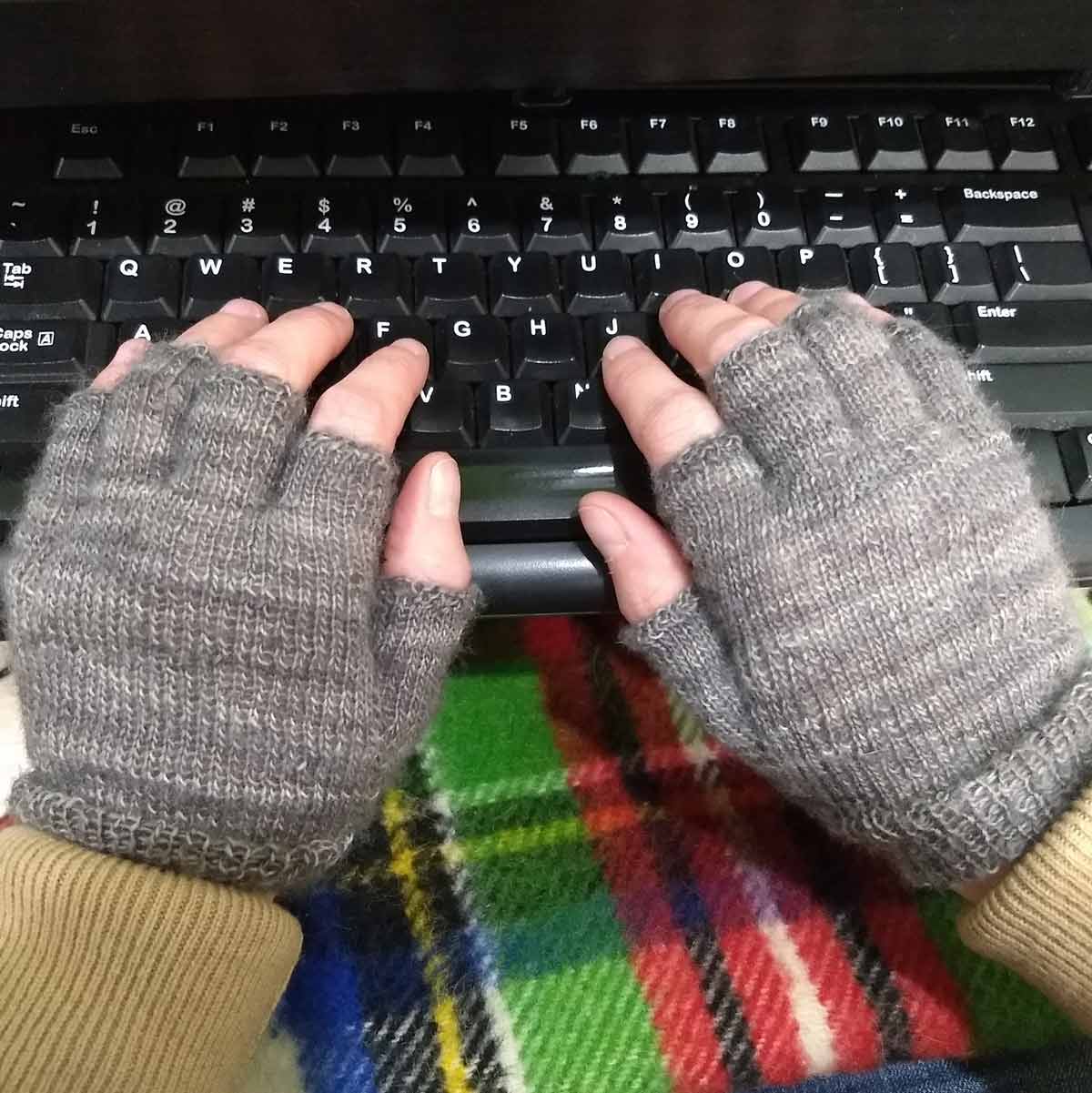 How have they held up over the past two months? I’ve worn them almost every day. I’m wearing them right now. I took these photos yesterday morning, it’s really difficult to photograph your own hands. 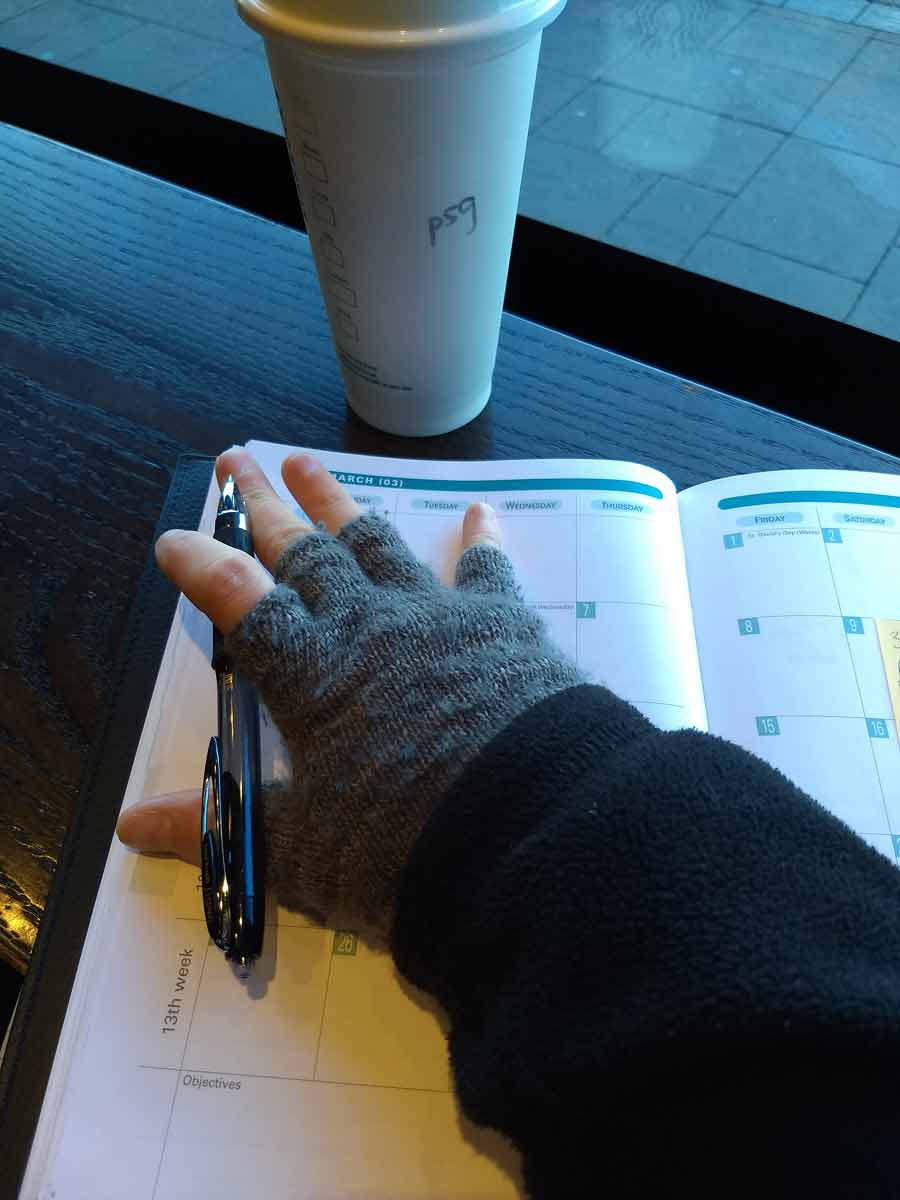 Yes, they’ve pilled. I don’t care too much given how much I’ve worn them.

They’re delightful to wear while typing, writing with a pen, watercolouring, driving, grocery shopping (especially as I pull items out of the freezer case).

Will I knit a pair in single ply cashmere? Maybe. Probably not. This pair meets my needs and will hopefully last a long while. It’s possibly my curiosity will win and I’ll try. I need to do the math to see if I have enough yardage in my swatch ball of cashmere leftover from the Triangle Scarf.

Will I clean up all the pilling on this pair? Yes. I’ve spilled more coffee and tea on them than I want to admit. I’ve also dropped them in parking lot puddles more than once. They’re due for a bath. After that they’ll receive some additional care.

Would I prefer to knit a pair in a two-ply lace? I’m not sure. Maybe. While I think it would definitely address some of the pilling issues, I’m not sure how curious I am right now to knit another pair.

However, do I wish I’d knit any part of these differently? Yes. I wish I’d cast on fewer stitches at the cuff and knit an extra half inch. They’re a bit too short and have stretched out. I may weave in some elastic thread instead. I’m still wearing them so it doesn’t bother me too much!

What is the point of this post for you, dear reader?

Try something different. Even if everyone says you can’t use a yarn, if you aren’t satisfied with that answer, make an experiment. If a full-size project isn’t possible due to budget or time, figure out a way a smaller swatch could work. Instead of a sweater, knit a cowl or shawl. If a full pair of socks is intimidating, try knitting shoe liners or Miriam Felton’s footie socks.

It’s one thing to read why something does or doesn’t work. I believe it’s the process of experimenting (playing) where we learn and truly understand why.